The Rev. Canon Constance C. Coles is my wife. We have two adult children, Sarah and Isaiah.

Growing up in an Army family that moved regularly and had only sporadic engagement with churches, I had no firm basis for faith but some experience. As a teenager, I was inspired by the Civil Rights movement and especially Dr. King. I realized this movement was powered by the faith of its participants and its leaders. 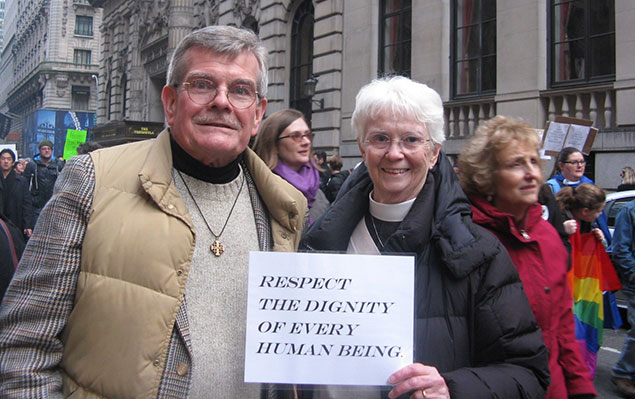 When I went to college I wanted to learn more about faith. My African American roommate (all four years) knew far more than I about religion and many other things – and he worked for Dr. King while we were in college. We made a practice of attending church together at a different place regularly on Sundays, although we also went to synagogues and at least one Buddhist temple – but not, I think, to a mosque. We went to several Black churches, and to Russian and Greek Orthodox churches, as well as Friends meeting and Unitarian meetings. I am sure we went to an Episcopal Church, but I do not recall that. Thus I gained some exposure to the varieties of religious experience in New England. We also discussed religion regularly, as well as politics and race.

As a senior I wanted to learn still more. I applied for and received a Rockefeller Brothers Fund fellowship for a “trial year” at seminary, and, with that, I was admitted to the M.Div. program at Union Theological Seminary.

Union formed me – that is the community in which I came to acknowledge that I am a Christian. And that is where I decided that I am not called to the ordained ministry.

Among many other positive changes in my life mediated by Union, I fell in love with a fellow student. Constance and I were married in the Union chapel. Constance happened to be an Episcopalian, but at that time ordination was not open to women.

After seminary, while I went to law school, Constance pursued a lay ministry in a wonderful UCC parish. That experience led her to sense a call to ordained ministry. She became more active in the Episcopal Church, and in due course Constance was ordained a priest by Bishop Paul Moore. Shortly thereafter I was confirmed by Bishop Moore. Thus I became a member of the Episcopal Church and a clergy spouse.

As Constance for many years served as a parish priest and rector, I was never a vestry member. Instead I tried to be helpful informally, as a husband. Serving on the altar guild in two parishes was very rewarding.

Along the way I was invited to volunteer on an Executive Council committee dealing with responsible investing, and in that way I found a lay ministry that seemed just right for me.

Now we belong to two parishes. In the Diocese of Connecticut, where we have a house, we belong to the Church of the Holy Advent in Clinton. In the Diocese of New York, where Constance is canonically resident and served on the Bishop’s staff, we are members of the Congregation of St. Saviour at The Cathedral Church of St. John the Divine. Both are strong parishes made up of good people.